Each year the Students and Young Professionals Committee organizes a student paper contest in conjunction with the CRPA annual conference. The contest is open to all students enrolled full-time in a Canadian college or university program related to radiation sciences. Students are invited to submit an abstract on a topic related to some aspect of radiation.

From among the submissions, three finalists are selected and given the opportunity to present their work in a plenary session at the conference. Following is the 2019 winning paper.

Following a radiological or nuclear event, a rapid dose assessment can inform medical providers as to the proper course of treatment for exposed individuals. This dose assessment tool can significantly decrease the required assessment period, ultimately being the deciding factor in saving the life of a patient.

In order to achieve this goal, our group adapted the cytokinesis-block micronucleus (CBMN) to an imaging flow cytometry (IFC)-based method. These two techniques were paired to create an automated high-throughput biodosimetry tool to improve the traditional (time-consuming) scoring microscopy-based method.

The CBMN assay is used to assess the frequency of chromosomal damage, specifically micronuclei (MN), in cells where cytokinesis has been blocked without inhibiting nuclear division. These cytokinesis-blocked cells thus produce binucleated cells (BNCs) rather than permitting the two daughter cells to separate. Damage inflicted by the radiation can be estimated by quantifying the frequency of MN per BNC derived from human peripheral blood lymphocytes.

Blood samples from healthy donors who were diverse in age (25 to 60 years old), sex, and background were irradiated using the X-RAD 320 (precision X-ray) at an energy of 250 kVp and current of 12.5 mA in the dose range of 0–10 Gy. Following irradiation, blood samples were incubated for two hours at 37°C, and 5% CO2 to allow for DNA repair. Then the blood was placed in culture media containing phytohemagglutinin (PHA), which stimulates the lymphocytes to proliferate.

After the blood samples had been incubated for 24 hours, cytochalasin B was added to block cytokinesis. Cytochalasin B stops the cells from dividing into two daughter cells.

We left the samples to incubate in order for the cells to proliferate and arrive at the cytokinesis stage. After the samples were incubated for 44 hours, the cells were fixed with FACS Lyse, which fixes the lymphocytes while lysing the red blood cells. Fixation of 22 samples requires two people and takes approximately two hours.

The cells were stained with a fluorescent DNA stain (DRAQ5), which is considered the most appropriate DNA stain in cell proliferation studies with the laser wavelength (642 nm) used on our cytometer. IFC analysis of the samples was performed on the IFC ImageStream®X Mk II using an autoplate that can hold up to 96 samples. This plate can be loaded directly onto the IFC ImageStream®X Mk II autosampler where analysis can be automatically performed for each dose point.

Data files were analyzed using the IDEA Data Analysis Software, which determined the total number of events, the BNCs, and the MN per BNC.

During this methods-development project, several experimental parameters were optimized to improve throughput:

As a result of improving the methodology, a laboratory-specific calibration curve was generated using the ratio of MN per BNC. This curve demonstrated a dose-responsive increase in MN/BNC frequency up to 5 Gy, after which the MN/BNC frequency started to decrease due to excessive damage in the cells. This curve can be used to estimate the dose to a sample exposed to an unknown amount of radiation in this dose range. 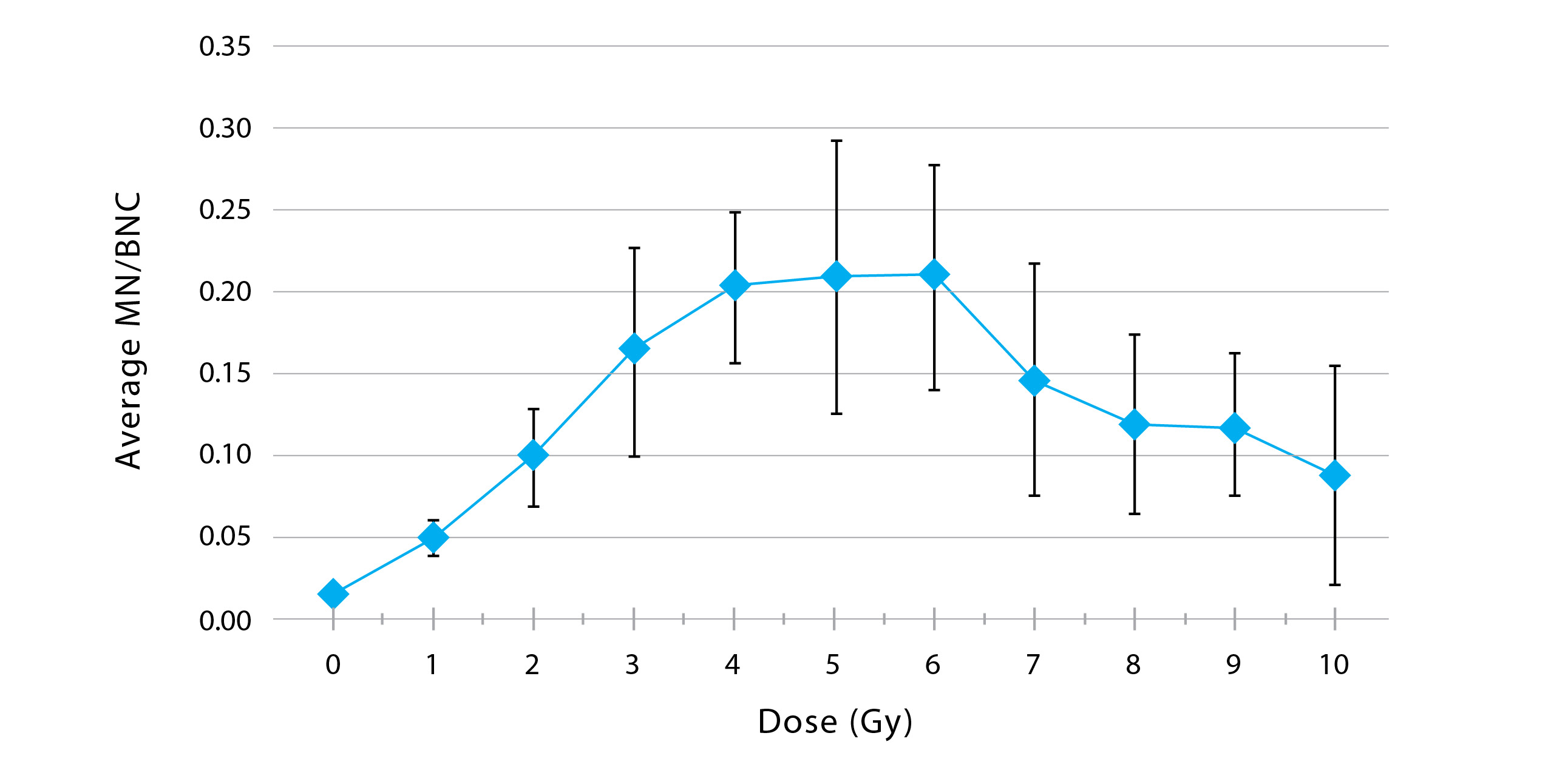 The dose-response curve that was generated using the results from the CBMN experiments performed in the last eight months confirms the feasibility of pairing classic CBMN experiments to IFC. This provides triage-quality dose estimates in the range of 0–5 Gy (± 0.5 Gy), in the event of a radiological or nuclear emergency. By pairing these two techniques, it’s possible to eliminate manual microscopy, further reducing the required analysis time from weeks to days.

The CBMN assay adapted to IFC can be used as a tool during an emergency event to assess the irradiation dose experienced by individuals to inform the medical community of the appropriate course of treatment. For example, at doses below 2 Gy, the patient would be monitored as an outpatient, whereas at high doses, hospitalization and treatment with cytokines and other medical options are required.

The next steps for this work include validating the methodology with blinded samples and performing an interlaboratory comparison with our collaborators at Columbia University.

In closing, accurate biodosimetry can be achieved using an automated miniaturized protocol and could significantly improve the throughput of biodosimetry for emergency response.

Riham Darwish is a third-year biomedical and electrical engineering student at Carleton University. For the past eight months, she has been working for Health Canada’s Consumer and Clinical Radiation Protection Bureau. Upon the completion of her internship at Health Canada, she plans on pursuing graduate studies in radiobiology.