The entire world had to reinvent the way it works in response to the COVID-19 pandemic, and the United Nations Scientific Committee on the Effects of Atomic Radiation (UNSCEAR) was no different. For the first time in history, UNSCEAR held its 67th Session virtually (instead of hosting it in Vienna) from November 2 to 6, 2020.

The online meeting was attended by over 200 participants from 27 member states, four observer countries, and 11 international observer organizations, as well as numerous consultants and experts.

While working hard reviewing session documents, the Canadian delegation also had a lot of fun in our team meetings (see photo). 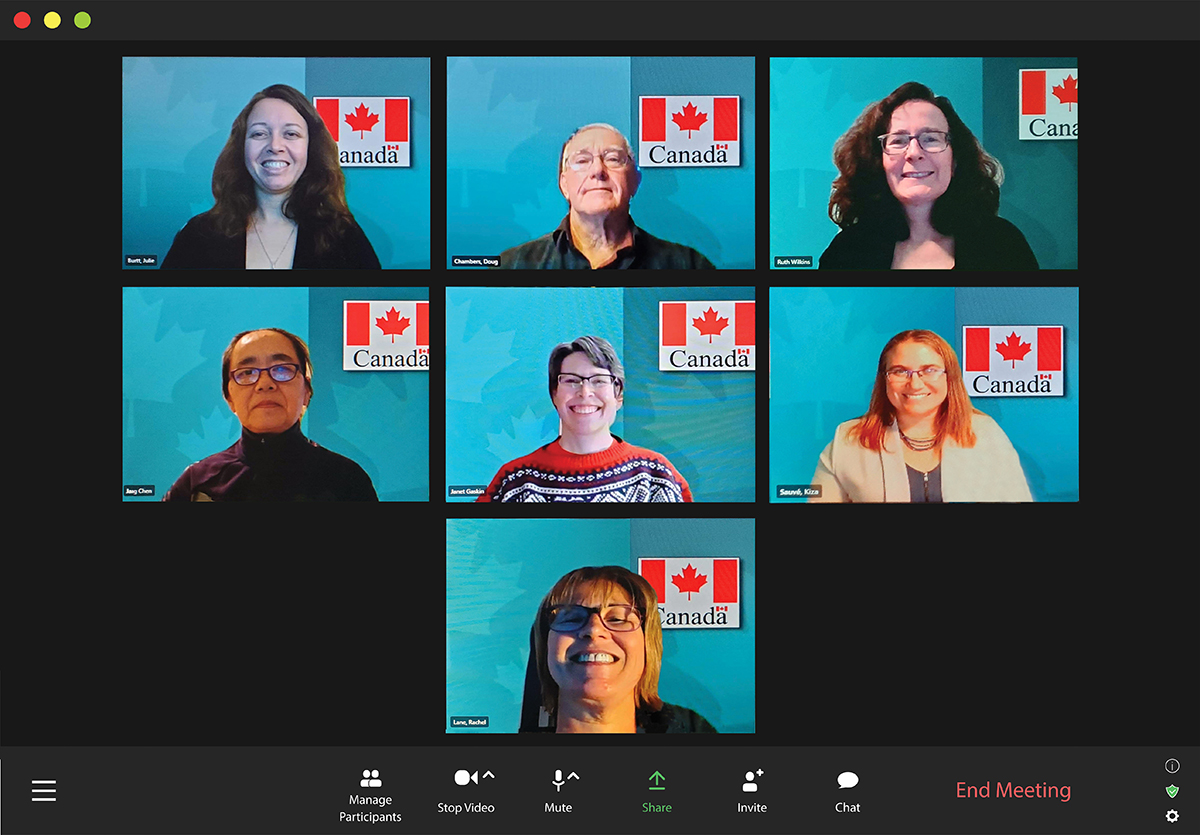 Prior to the session, the Canadian delegates, supported by several Canadian experts, reviewed and provided constructive comments on the following four draft reports:

After several years of technical review, UNSCEAR approved all of the documents except Evaluation of Occupational Exposures to Ionizing Radiation for publication after its 67th Session. Publication of the Fukushima document was a top priority for UNSCEAR to ensure publication in time for the 10th anniversary (in March 2021) of the devastating earthquake, tsunami, and nuclear accident in Japan. The fourth document, Evaluation of Occupational Exposures to Ionizing Radiation, will go through another detailed review, with approval for publication anticipated after the 68th Session of UNSCEAR in June 2021.

At the time of the meeting, the UNSCEAR Secretariat was facing the stress of additional restrictions imposed in Vienna due to a second (and much larger) wave of COVID-19 infections. To add to this difficulty, a senseless act of violence occurred in Vienna[1] on the evening of the first day of the meeting. In the face of these difficult conditions, the Secretariat demonstrated tremendous resilience and ensured the meeting progressed successfully. In these uncertain times, I am comforted by the professionalism and hard work of so many sharing a common goal of scientific rigour.

Julie Burtt is a radiation and health sciences officer with the Canadian Nuclear Safety Commission. Her research focuses on potential health effects from exposure to low doses of radiation. She was an advisor for the Canadian delegation to the United Nations Scientific Committee on the Effects of Atomic Radiation (UNSCEAR) in 2019 and 2020.

1. Five people died (including one assailant) and 17 others were wounded in a terrorist shooting in the heart of Vienna on Monday, November 2, 2020.