Each year the Students and Young Professionals Committee organizes a student paper contest in conjunction with the CRPA annual conference. For more information, visit the CRPA website (http://crpa-acrp.org/home/?page_id=5295).

For 2018, instead of selecting one winner in advance of the conference, three finalists were selected to present their work at the conference. Each of the three finalists had their conference registration, travel, and accommodations provided courtesy of this year’s student contest sponsor, the University of Ontario Institute of Technology (UOIT).

The winner of this year’s Anthony J. MacKay Award is Humza Nusrat, a fourth-year PhD student at Ryerson University. 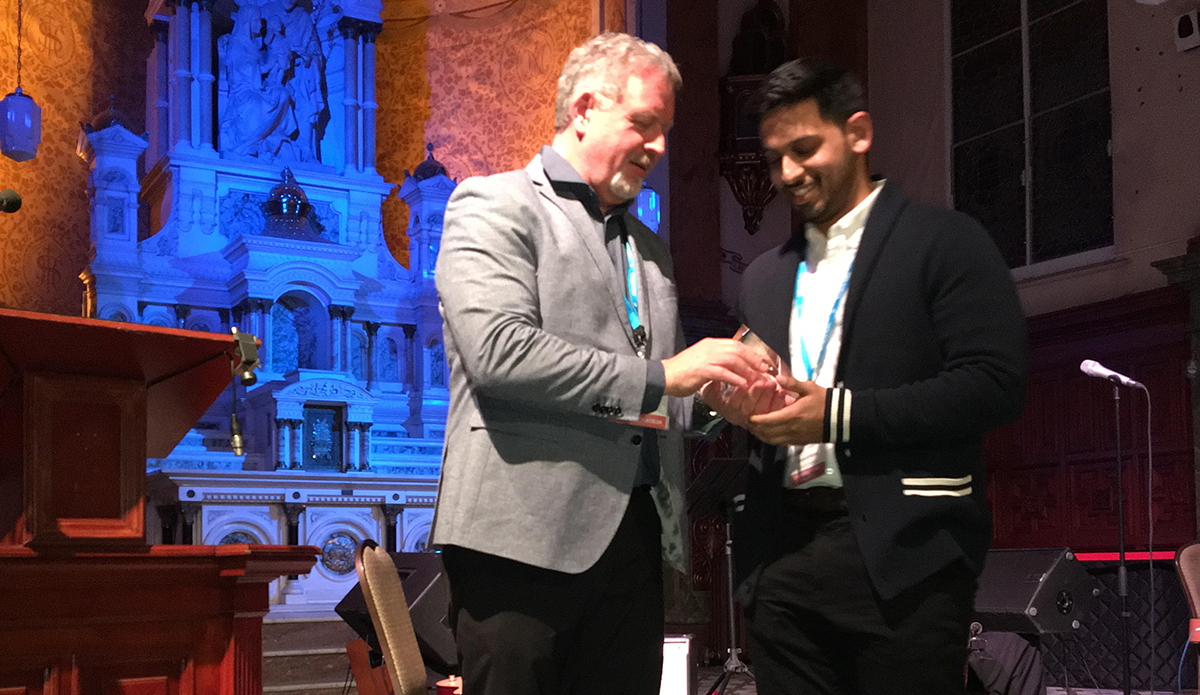 Knowledge regarding the quality of radiation, the ability of radiation to cause damage to living tissue, in addition to absorbed dose can be very useful. The potential biological damage caused by low-energy X-rays or heavy charged particles can be many times more severe than the 1 MeV (or higher) photons typically used in cancer radiotherapy.

In cancer radiotherapy, absorbed dose is used to optimize the amount of radiation delivered to the patient, but does not account for variations in radiation quality (energy levels). Numerous studies have shown that the impact of low-energy scattered radiation on the radiation damage to the patient must be measured for optimal treatment. According to current literature, these low-energy particles may be causing more damage to tissue (by inducing cell death) than previously predicted.

In the radiation protection industry, a radiation-weighting factor (WR) is used to account for variations in radiation quality. However, these factors are often gross estimations.

By measuring the energy spectrum, many characteristics of the radiation source/beam can be resolved. Using the National Institute of Standards and Technology (NIST) collisional stopping-power database, the linear energy transfer spectrum can be obtained if the energy spectrum is known. Similarly, the maximum relative biological effectiveness can be determined from the energy spectrum, as shown by Nusrat et al. (2018).

Plastic scintillators are made of organic materials that emit visible light upon interacting with radiation. Their response is intrinsically dependent on the stopping power of incoming radiation, as shown through Birks’ Law (Birks, 1964).

Using organometallic chemistry, various amounts of high-Z dopants can be incorporated into the scintillator volume. By adding high-Z elements, the radiation interaction cross-sections of the scintillator can be tuned in order to change its sensitivity to certain energy ranges (e.g., adding high-Z dopants can induce greater sensitivity to low-energy X-rays).

The detector apparatus was constructed to allow the scintillator light to be guided via an optical fibre to a Hamamatsu H17021 photosensor module (design shown in Figure 1). Measurements were conducted at Sunnybrook Health Sciences Centre for high-energy (6, 9, 12, and 15 MeV electron beam) and low-energy (100, 180, 250, and 300 kV X-rays) radiation beams. 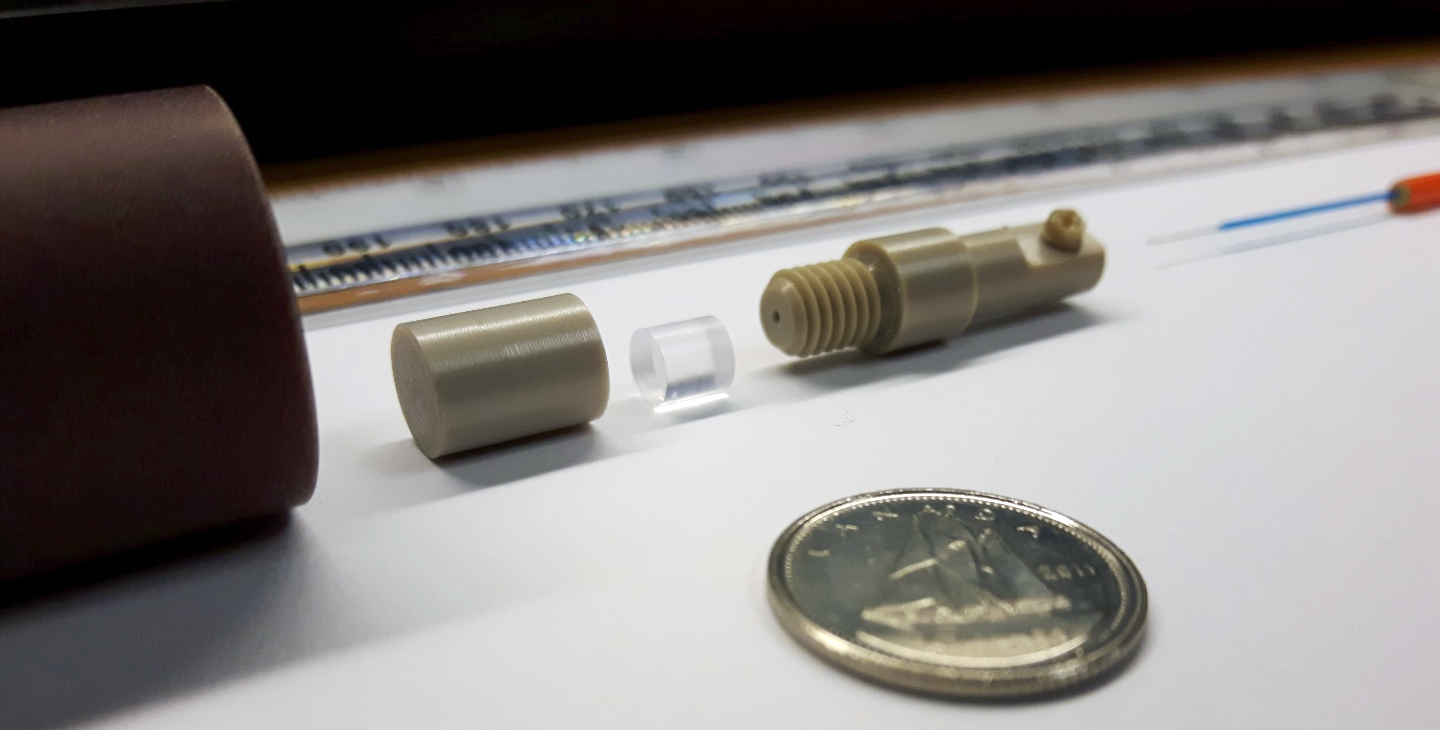 Based on the response of each scintillator to various monoenergetic energy bins, the response matrix (R) was created using Geant4 10.3 Monte Carlo simulations. The signal matrix (S) was obtained through measurements. Using these two pieces of information, the energy spectrum (∅) can be resolved:

The response matrix was created using energy bins of varying sizes; measurements were obtained using the detector apparatus. We discovered that doping with 5.0% Pb increased the sensitivity to low-energy radiation (100 kV X-rays) by 474% (± 0.78%) relative to the highest energy used (15 MeV electron beam). As the doping concentration was decreased, the low-energy sensitivity decreased significantly (141% ± 0.22% for the 1.0% Pb–doped scintillator). Using these measured and simulated results, the energy spectrum can be resolved.

In both radiotherapy and radiation protection, information regarding radiation quality is essential. By adding varying levels of high-Z elements to plastic scintillators, the energy spectrum and, subsequently, the linear energy transfer (LET) and maximum relative biological effectiveness (RBE), can be resolved using a simulated response matrix and the detector apparatus used in this study.

Humza Nusrat is a fourth-year PhD student in the Commission on Accreditation of Medical Physics Education Programs (CAMPEP)–accredited biomedical physics program at Ryerson University. His research work has focused on evaluating the variations in cancer radiotherapy using Monte Carlo simulations and the development of novel technology for the measurement of radiation effectiveness at Sunnybrook Health Sciences Centre. He is the vice-chair of the student councils of both the Canadian Organization of Medical Physicists (COMP) and the American Association of Physicists in Medicine (AAPM) Working Group to Promote Non-Clinical Career Paths for Medical Physicists.