When conducting Lu-177 therapy to treat neuroendocrine tumours (NETs), steps are taken to ensure the dose is administered safely to patients. Typically, the Lu-177 dotatate is diluted in a saline bag and then infused through an intravenous (IV) line to the patient. After administration, the saline bag and IV line are flushed to ensure the residual dose is administered to the patient.

However, changing the Lu-177-dotatate-infused bag to the second saline bag increases the risk of contamination. We initiated this quality assurance project to estimate the residual dose of Lu-177 dotatate in the patient’s IV line and determine if flushing is a necessary step. 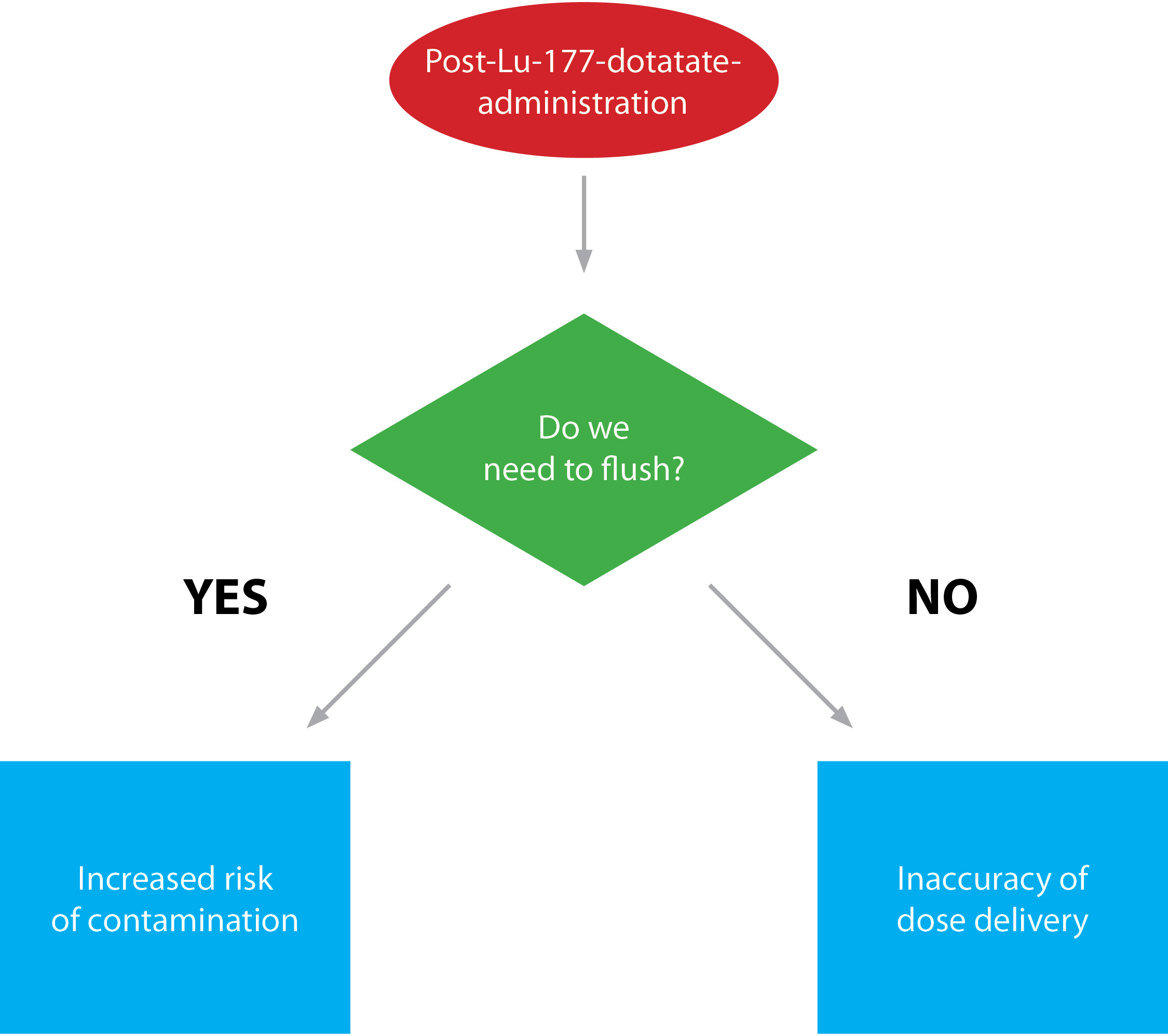 We wanted to know if flushing the line after Lu-177 therapy improved dose administration or if discarding the line and saline bag would lead to better practice (see Figure 1). We did this in two steps:

The results could serve as a guide to technologists looking to develop better practice when administering Lu-177 dotatate. Since this therapy is still a trial in many areas around the world, this study can serve as an important resource when establishing standard protocols for Lu-177 therapy after clinical trials become treatments.

What is the residual activity in the IV line after initial administration of Lu-177 dotatate?

Primary – The residual dose within the IV line will not cause a significant impact on the activity administered to the patient (residual activity <10% of the administered dose).

Secondary – Flushing the IV line post-Lu-177-administration will not be a necessary step in the procedure. This would then limit risk of contamination while decreasing the time needed for the therapy.

The field of nuclear medicine allows the visualization of various cancerous sites through imaging after the use of specifically targeting diagnostic radiopharmaceuticals. These sites are also treated with therapeutic radioactive molecules, which are used to kill cancerous cells.[1]

Lu-177 therapy treats metastatic and inoperable NETs through chemical attachment of Lu-177 to the molecules, targeting the over-expressed cellular receptors on the surfaces of the cancerous cells. These cellular receptors are targeted by Lu-177 dotatate specifically, which acts as the Lu-177-labelled somatostatin analogue.[2]

The radioactive decay of Lu-177 passes through tissue by emitting low-energy gamma photons that can be seen through external imaging. Lu-177 decay also emits beta particles where the energy of these particles has been absorbed by the cancerous sites and has killed them.

Lu-177 has a physical half-life of 6.64 days.[3] Due to this long half-life, decay due to transportation would be negligible, which allows for shipment from the reactor production facility to various clinical sites all over the world (Emmett et al., 2017).[4]

For quality assurance in nuclear medicine, we must ensure all protocols are periodically assessed to maintain best practice. Quality assurance sets a benchmark for various procedures,[5] which is an advantage as an educational tool for technologists. Satisfying the requirements for quality would improve the care given to the patients, which is our main goal as health-care practitioners.

This study was conducted at the Princess Margaret Cancer Centre in Toronto, ON. The protocol there is for Lu-177 dotatate to be supplied in volumes ranging from 15 to 30 mL, depending on the patient’s weight in kilograms and the radiation oncologist’s orders. In the radiopharmacy, some saline (equivalent to the patient’s dose) is removed from a 100 mL saline bag and the patient’s dose is added.

The dose is then delivered to the inpatient floor in a radioprotective container. The infusion is set up on the patient’s IV pump and infused at a rate of 200 mL/hr over 30 minutes. After the Lu-177 dotatate infusion, the line is flushed with 25 mL of normal saline over five minutes.

Flushing the line with saline after the Lu-177 infusion, however, increases the risk of contamination to the technologist when the Lu-177-dotatate-infused bag is changed to the 25 mL saline bag. For example, droplets of residual Lu-177 dotatate could splash on the surface of the injection table, the hospital floor, the patient’s gown, or the technologist’s lab coat.

To prevent this, we assayed (tested) the IV line to find out how much residual dose of Lu-177 dotatate remained in the patient’s IV line and determine if flushing is a necessary step in the therapy. Eliminating the flushing step would decrease the risk of contamination and increase workflow efficiency.

Safely administering Lu-177 dotatate to the patient while limiting contamination is an important aspect of our research. In their article “Contamination, a Major Problem in Nuclear Medicine Imaging,”[6] Kumar et al. assessed a case study that described the effects of radioactive contamination in imaging. A 55-year-old man who was diagnosed with prostate cancer was scheduled for a whole-body bone scan to see if the cancer had spread to his bones. A dose of 740 MBq of 99mTc-methylene diphosphonate was injected intravenously prior to imaging.

Technologist safety during therapy should not be overlooked when assessing exposure rates. In their paper “External Radiation Exposures from Lutetium-177 Dotatate Therapy Patients,”[8] Erwin et al. aimed to estimate the external, total-body doses and the patient self-attenuated exposure rate to staff involved in Lu-177 dotatate therapy.

Erwin et al. confirmed that there was a significant increase in radiation exposure to staff involved in Lu-177 therapy, especially nuclear medicine technologists. Flushing the IV line increases the risk of contamination, which then increases exposure rates and prolongs the time necessary for the procedure. Eliminating this step could reduce the exposure rate for staff.

According to the Canadian Nuclear Safety Commission, the effective dose limits for a technologist is 50 mSv a year and 100 mSv over five years. The increased exposure from Lu-177 dotatate may contribute to reaching those limits. Pregnant workers must be especially cautious, due to having a limit of 4 mSv during their pregnancy term.

Ensuring exposure is as low as reasonably achievable (ALARA) when executing nuclear medicine protocols is important. Maintaining best practice for technologists through quality assurance is also an important aspect in ensuring the patient’s safety.

Figure 2: Contamination resulted when a small amount of the residual dose (140,000 counts) spilled on the injection table after attempted flushing of Lu-177 dotatate from the IV line.

However, if the IV line and bag are discarded rather than flushed after the administration of Lu-177 dotatate, there would be uncertainty about how much residual activity was left in the line and bag, resulting in uncertainly about the dose administered. If a significant amount of activity is left in the residual dose, the technologist might under-dose the patient. If the residual activity is over 10% of the actual prescribed dose, this would not follow the protocol’s requirements (Wong, 2015).[9] (See Figure 1).

In one case study, a patient was prescribed a reduced Lu-177 dotatate dose due to a significant change in their hemoglobin and neutrophil levels overnight. When the IV line was tested post-administration, 11.5% of the prescribed dose was still in the IV line, which significantly impacts the dose administered. This scenario brought up the uncertainty of the dose remaining in the IV line and initiated this research project.

In their paper “Residual Activities of 99mTc-labelled Radiopharmaceuticals In Routine Nuclear Medicine Practice,”[10] Stavrou et al. examined Tc-labelled radiopharmaceutical administrations to determine the actual amount of activity given to the patient. They found that the mean effective activities were in the range recommended by the European Association of Nuclear Medicine guidelines. The residual activity remaining would thus not compromise the department’s protocols.

If flushing is not necessary after the administration of Lu-177 dotatate, the risk of contamination could be decreased. In addition, the workflow efficiency may be increased, which would limit the time required for the administration portion of the procedure.

Overall, we wanted a better understanding of the administration of Lu-177 dotatate to ensure the administration portion is as efficient as possible while abiding by the rules of ALARA and the protocol limits of the study. We wanted to answer two questions:

Note:
In the next instalment, we will describe the study procedures and evaluations.

7.    CT scanners consist of an X-ray source opposite an arc-shaped array of detectors. The collimators are located immediately in front of the detectors to protect them from scattered X-rays.