According to the Canadian Nuclear Safety Commission (CNSC), inhaled radiation from radon makes up approximately half of the average Canadian’s annual effective dose from natural background radiation (0.9 mSv/year of an average 1.8 mSv/year). In some cities, it’s estimated to be substantially more, up to 78% in cities such as Winnipeg (3.2 mSv/year of a total 4.1 mSv/year).

While these estimates might be helpful as a general reference and a starting point, it’s well known that radon levels in indoor environments vary enormously depending on many factors, and actual effective doses will vary greatly from case to case.

Given that the only way to know the indoor radon level in a building is to measure it, let’s calculate the actual annual effective dose from radon at several different measured concentrations. Because of the COVID-19 pandemic, many Canadians are now working and attending school from home, which means estimating exposures has never been simpler.

For this exercise, let’s consider three people working or studying from home, who each spend approximately 22 hours per day indoors:

The community of Dauphin, MB, participated in Take Action on Radon’s 100 Radon Test Kit Challenge from the fall of 2019 to the spring of 2020. Eighty-seven homes were tested for radon, and 557 Bq/m3 represents the average of all the radon levels measured.

Using a conversion factor of a 1 mSv/year effective dose as equal to 300 kBq•h•m-3, as per Health Canada’s publication Reducing Radon in Existing Homes: a Canadian Guide for Professional Contractors, the annual effective dose may be calculated as follows: 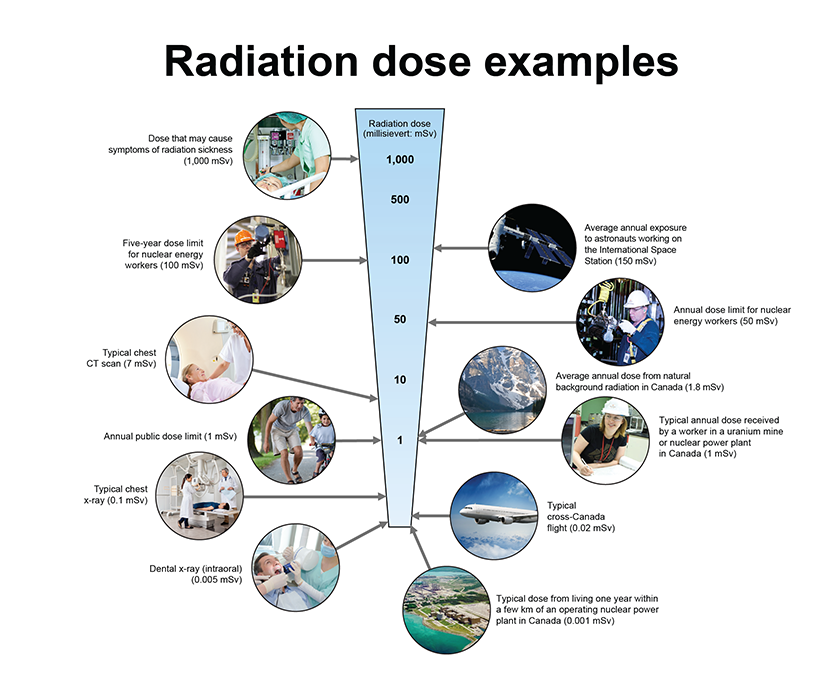 This is in line with the existing estimates for background radiation as quoted by CNSC. Those estimates run from a mere 0.4 mSv/year annual inhalation dose in Vancouver up to a more considerable 3.2 mSv/year in Winnipeg.

According to the radiation dose examples in Figure 1, this is nearing the typical 7 mSv dose received during a chest CT scan.

This is equivalent to more than two 7 mSv chest CT scans per year. There aren’t any other examples in this range provided by CNSC, but if we look at Person C’s five-year dose (14.9 mSv/year × 5 years = 74.5 mSv), we see that, simply by virtue of where they happen to live (in a home with average radon levels for their town) this person is approaching the five-year dose limit for nuclear energy workers (100 mSv).

What conclusions can we draw from this exercise? It may be tempting to assume that these calculations overestimate the importance of radon exposure, either by inflating the number of hours spent at home, or by using reference radon levels that are well above the Canadian average. However, spending most of the day at home is a reality for an increasing number of Canadians.

Allowing for two entire hours spent outside the home daily (running errands, walking the dog, etc.) seems to be a reasonable starting point, but this could easily be adjusted if a more representative number of hours was decided upon.

As for the radon levels used in these examples, these are pertinent, real-world numbers. Both 100 Bq/m3 and 200 Bq/m3 are important decision-making thresholds for many Canadians. Even for Person C, living in Dauphin, MB, we used only the average radon level from Take Action on Radon’s recent 100 Radon Test Kit Challenge for calculation purposes; the highest indoor radon levels recorded in Dauphin were in the thousands of becquerels per cubic metre.

It’s worth noting that the 100 Radon Test Kit Challenge has gathered thousands of data points since its inception in 2018, and this data suggests that a larger percentage of Canadian homes may be above the Canadian guideline level than is currently thought.

Of the three examples in this exercise, only Person A had a calculated annual effective dose that fell within the range quoted by CNSC for annual inhaled radiation. This suggests that for many Canadians, including many living below the Canadian guideline level of 200 Bq/m3, inhaled radiation from radon makes up well over half of the average annual effective dose from natural background radiation (as is currently assumed).

Have you tested your home for radon? No matter the average radon levels in your region of the country, every home needs to test! For more information on radon, visit Take Action on Radon.